A while ago I worked on a simple CCTV system for work, which involved using software to capture images every second then batch convert them to video every five minutes. It was crude but did the job.

I also dabbled in the past with time lapse videos, however this was a more manual process with images capturing to a folder, then personally loading them into Windows Movie Maker to create the video. With the tedium of creating the videos, the software I used for capturing (YAWCam) would hang after a few weeks constant running, not to mention without upkeep, the hundreds of thousands of image files populating the hard drive.

As a project it was time to combine the learnings from these and create an automated time lapse video creator, a program that would capture images, then create a 5-minute video that contains the days’ footage, and finish by deleting the temporary images to leave just the days video. 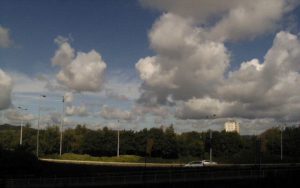 As with the CCTV project, a batch file will be used to create the process as what I need can be achieved by DOS commands plus it’s able to be called by Windows Task Scheduler. This time I will have the advantage of using an IP camera instead of USB, so negating the need for software to capture images, however the WGet utility is needed to download and save the images locally. Also the script will invoke FFMpeg to convert the images to video at the end of the day.

Getting started, place the WGet utility in the System32 folder so it can be called from dos without specifying a path. Then create this folder hierarchy on the root of C:\ drive:

Here’s the code for capture.bat, I placed this in the Data folder with ffmpeg.exe for neatness:

::INCREMENT COUNTER BY ONE
set /a counter=counter+1

Next is to create a Scheduled Task in Windows to launch the program each day at midnight, this process varies by system but ensure that user privileges are high enough to write and execute on disk. 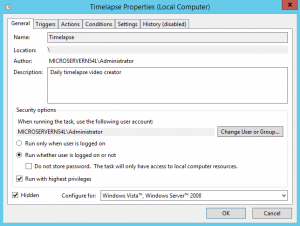 I found Windows Server 2012 R2 had a lot more options over Server 2003, so I set the task to run when even when not logged on, to run hidden, and now the time can be specified to the second, so chose to start task at 00:00:03 to make sure the date is correct.

Hopefully the annotation will be helpful enough if you would like to apply your own tweaks, but here are some of notes about the issues I faced when creating the script:

I dare not say that the code is perfect, or if the choice of programming language is suitable, the aspiration would be to create a self contained executable with a configuration file to specify target folders, change finish time and time between image captures. But for now it’s doing the job just fine.

Since creating the program I’ve reused parts of the code to create a preview program that compiles the images taken so far that day into a video, without deleting any files. Here’s the code, again, save as a bat file and double click to run immediately.