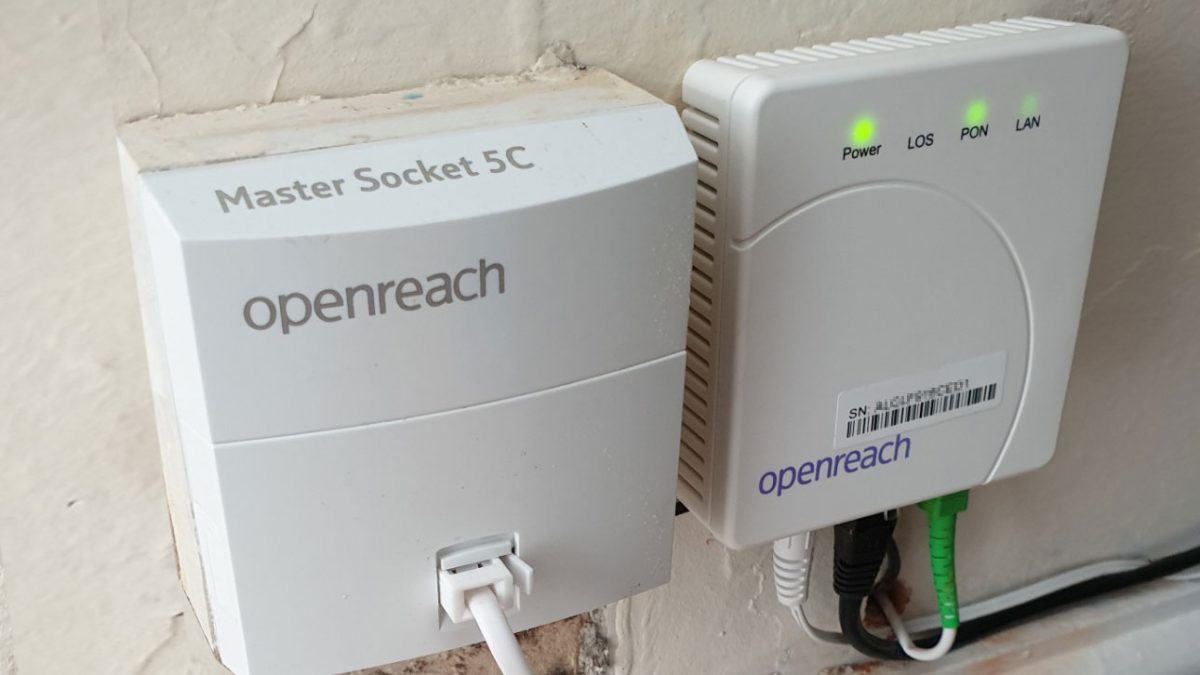 Unexpectedly and to much excitement, my home internet is now provided via FTTP.

For background, I was previously in a FTTC environment getting average speeds due to my distance from the cab, however good enough to assumably be overlooked for the next phase of the Openreach Ultrafast rollout. Not that I’m complaining, 2020 is the year my speed gets a much-needed boost.

2020 also turns out to be the inaugural international work from home year, so had the opportunity to have a front seat view from my home office on the activity and timeline that brought FTTP home.

I’d like to share my observations and timeline as an example of what you can expect should you get the inkling of fibre coming to your street soon.

Before we get started, as my expectations rose, I found this post by Andy’s World invaluable for identifying activity and helping me confirm that FTTP was on its way.

As mentioned, I was already in a FTTC enabled area. From the cab the copper “last mile” travelled underground from the cab to my nearest telegraph pole, then overhead to my property.

I was getting speeds on average of 40Mbps down and 5Mbps up due to the distance from the cab, I also suffered loss of sync approx. every other day. I notice that my overhead line was a lot older than others on the pole, identified by the greying colour and how you could identify both cores on the cable rather than the single looking shielded core of adjacent cables. A 48h MTBF was not ideal but well within Openreach service levels, meaning I couldn’t get this drop cable replaced without a significant cost.

Being in an FTTC area, no matter how bad the connection is usually meaning that it is not up for consideration for upcoming phases of an Openreach FTTP rollout. Couple this to a Virgin media rollout along my street the previous year and this would reason that the demand for FTTP would be low.

Entering my second month of working from home, notice a lot of Openreach vans passing my door. I may be more observant of these given my profession, but it was a lot of activity over the normal fault-based callouts.

Later and as I started venturing out of the house again, it looks as though they were commissioning a new cabinet a couple of streets up, therefore assumed the activity was for this.

I happen to live near a train station, and was intrigued by the letters through the door.

Since moving in a year earlier, I’ve received a couple of letters of this type. But a new ticketing system combined with increased Openreach activity made me think if maybe this would include fibre. Hopes were still low at this point, but even if the rail infrastructure went for leased line circuits, this would increase the likelihood of FTTP.

Hopes were increased later in the month, when I noticed active involvement in the pole supplying my house.

To coincide, another letter relating to communications works on the rail system piqued my interest further.

Another letter, this time for roadworks to clear blocked ducts for Openreach, with my and adjacent poles labelled for work.

This was very telling, as FTTC was already available with a on pole distribution point (DP), either this was to increase the number of copper circuits, or for deployment of a new technology.

The conformation I needed; thanks to the Andy’s World post I knew what to look for.

This day a cherry picker arrived soon after 9am, and then commenced the installation of a FTTP termination at my local pole. It was a day later before the “Fibre lines overhead” label appeared but it was clear FTTP was on its way.

Through my work I’m able to check and order connectivity for premises, so now began my daily check to see if/when FTTP would be available.

Daily ISP provision check 16, and FTTP appeared as an order option, at 9am it appeared as an option but unable to order to lack of capacity, but an hour later it was fully available:

Before getting ahead and ordering the full 1000/115Mbps, time for a reality check to see what my current router can actually process, resulting in an order of 220/30Mbps later that day.

My ISP like many others allow me to upgrade speed within contract but now downgrade, so this will be a good starting point with the option to increase should I get a router upgrade.

Activation week, and more activity around the Openreach pole. Involving a cherry picker, a team of 3 descended to check over the FTTP distribution point.

Also noticed that the tensioners (Or the metal wire that attaches to the ring on top of the pole and is wrapped around the drop cable hold it to the pole) of my current copper drop cable were unwound slightly.

The day before I had an unexpected reconnaissance visit from the Openreach engineer assigned to my activation the next day.

My previous drop cable for reasons I cannot fathom was run into the house via a corner of the uPVC window frame, so was eager to have the fibre enter the house via a new route. And the five-minute visit was worth it as it was determined that a cherry picker was needed at pole side due to the slope of the road.

Openreach engineer turned up at 9am as promised, and a recap of the installation path.

The assumed installation work would disconnect the copper to the building, and replace the analogue master socket like for like with the new ONT. I needed the FTTC to remain in use while I transition IP addresses so at request the old copper would remain active.

Sub-plan was to leave the copper untouched, and run a new route of fibre only cable into the house. However, when the cherry picker turned up so did a supply of combined copper/fibre cable, allowing the supply of all services via the new route, and to replace the aging copper.

Fibre installation comes in two parts, the distribution point (either overhead or underground) to the outside of the property, and a fibre from the ONT inside the property out to meet the other.

First the hole was drilled close to the ONT location, the ONT was mounted on the wall and the internal fibre ran to the outside. The internal fibre is much thinner than from the pole due to the less armoured sheathing and benefits with more flexibility, although this comes at a risk of snapping or kinking the fibre, resulting in light loss and ultimately network loss.

Next stage with the help of the cherry picker was to plug in the fibre to the DP on the pole, and run it overhead towards the house. The fibre was secured to the house and run down the side of the building. During this the old copper was disconnected and new was connected at the pole.

Thirdly, the internal and external fibres are joined together. A new box is attached to the external wall that has inside a spool that will hold a few windings of each fibre, as the joining of the cables is considered a failure point, as few windings are included during the initial installation to give extra fibre should the cables need to be re-joined in future.

A portable splicing machine is used to join both fibres by lining them up, heating to fuse the two together, and shrink wrapping the join for protection. The unit also checks the light levels at this location, mine being 17 at this join, 14 at pole.

The fibre is coiled in the external box and closed, completing the installation of the fibre.

Commissioning is a simple as Openreach completing the order, then waiting for the PON light on the modem to illuminate. Such is the technology, there’s no fine tuning or testing of the signal, as long as the light levels at the splicing phase is good, the connection should just would. Although a sanity check wouldn’t go a miss and a quick speed test confirmed I was running on the new connection.

Fibre installed, the analogue side was reconnected with the use of a new mk5c socket, the copper in the new combo cable is extremely thin to the point where you’d struggle to believe it’s a pair. That so, VDSL sync speeds are comparable to the old drop cable, although I don’t think longevity was in mind with this design.

As FTTP enters a maturity, the efficiency and cost saving measures improve (depending on your side of the fence).

Early installations had modems which included a PSTN port for analogue phones, and were accompanied by a battery backup unit to keep the phone line active during power failures. Later units dropped the PSTN and battery options, in favour of four RJ45 ports, with the potential to provide 4 separate internet connections via the single fibre and modem.

The new ONT supplied for my residential installation was something new to me, a Nokia G-010G-Q. This unit is far smaller than previously seen, and is sized perfectly to replace in situ a BT analogue master socket. The compromise is from the bare minimum of I/O, with the only connections being power, fibre termination and a single RJ45 port for modulated data.

As expected, my internet connection has been perfectly stable and just what I need when working from home, in particular the upload speed and lower latency is a much-needed improvement for this website, which I host from a home server.

Ironically the install of FTTP has greatly improved the FTTC connection its replacing, now it syncs for days at a time instead of a hopeful 48hour maximum.

If you are like me and insist on using your own router, double check the WAN throughput before deciding on a speed profile. Even though Draytek advertises a 400Mbps firewall throughput, I’m reliably getting a maximum of only 180Mbps. This I would attribute to three active WAN and a couple of VPN all with load balancing options applied.